It was a tough week to choose just one Game of the Week with lots of good games coming out, so in these situations I always sort of default to whichever game I keep coming back to throughout the week. This time around that is the new iOS port of Wreckfest from Handy Games. It helps that the original release of Wreckfest, which was developed by Bugbear Entertainment, was already a beloved game on consoles and PC, so the source material here was always going to be good. What has really impressed me though is just how faithfully Handy Games has brought this technical marvel to mobile devices.

So at a basic level, Wreckfest is a lot of what you might expect from a destruction derby-style racing game. Multiple event types including full-blown destruction derbies, more traditional races, and some more off-the-wall event types, and tons of vehicles in all manner of shapes, sizes, and classes. There’s a wonderful career progression where you’ll play through various events earning points, leveling up, unlocking new parts and cars, and then upgrading your owned vehicles. 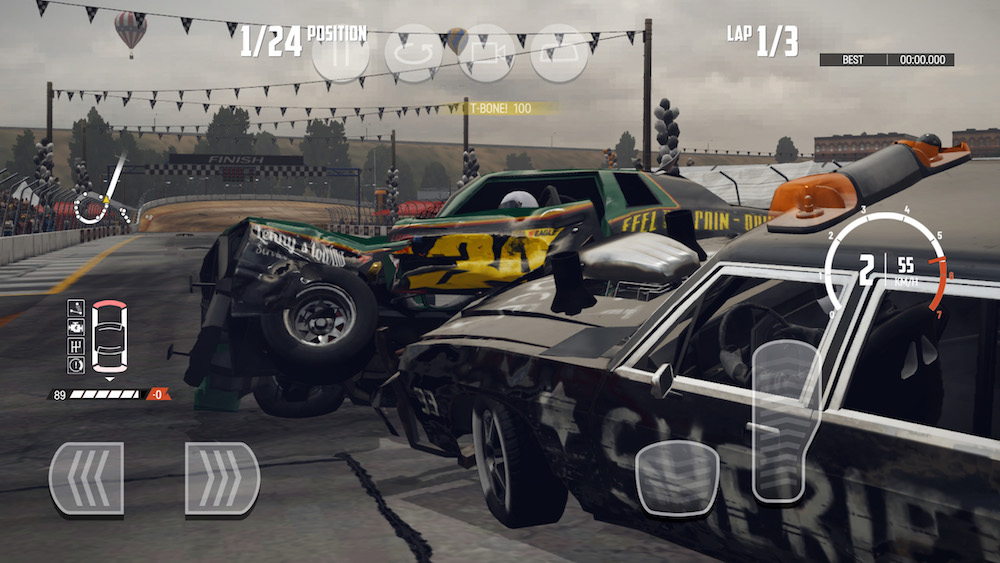 While it’s definitely standard-fare type stuff for any modern racing game, it’s worth noting that the progression system and drip-feed of new unlocks in Wreckfest is tuned especially well in that I frequently found myself playing “just one more event” which in turn becomes “just, like, a dozen more events” as I can’t wait for my next unlock or upgrade. With the extensive number of vehicles you can acquire, and the huge assortment of upgrades and parts you can apply to them, I don’t think it’s too out there to say that Wreckfest is like a racing game RPG in terms of its progression hooks.

The real hallmark feature here however is the destruction physics. Holy moly, the destruction physics. Your vehicle, and those of your opponents, can be damaged from basically any and every angle, and depending on how and where that damage comes in can greatly affect how your car handles after it gets wrecked. Not only does the damage affect performance, but it also causes an awe-inspiring amount of wreckage and debris. Parts and particles go flying all over, and it’s not just a visual flourish as most that debris will end up on the track waiting for some hapless racer to blast right through it. 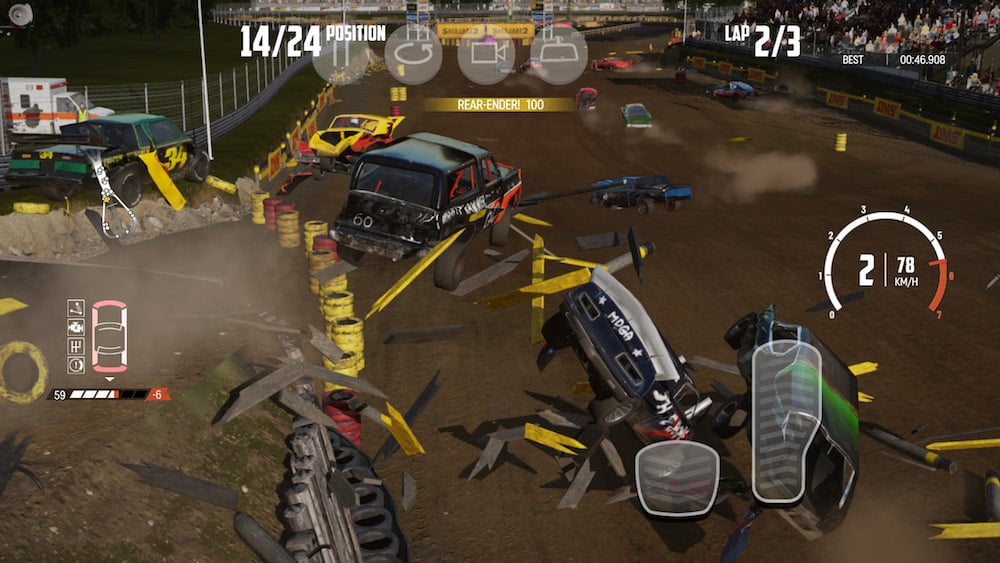 The part of this that really surprised and delighted me is that the destruction isn’t limited to just the vehicles but to the tracks and environments as well. I’m so used to cheesing my way through turns in a racing game by just barreling into an opponent’s side and using them as a shield as I take a turn with way more speed than should have been possible, but when I instinctively went to do that in Wreckfest I was caught by surprise when both our cars just blasted right through the fencing around the track, and then into a bunch of tire barriers which sent dozens of tires careening all over the place.

Yes, the environments are wonderfully destructible and that means that most the time you can’t cheese your way through turns, but this is actually a big win as it leads to an even better strategy: Plowing into your opponents and sending them off the track. It’s so much fun, and practically required strategy, to be a dirty racer in Wreckfest. Of course your opponents won’t hesitate to be dirty right back to you too, so turnabout is fair play.

Ok, I could probably go on and on about all the cool things I love about Wreckfest, but we don’t have all day. This is a fully premium release that will set you back $9.99, and then there are multiple vehicle and item packs available as additional IAP. Nothing essential to completing or enjoying the main game, just extra stuff if you want. Oh, and Wreckfest on mobile supports physical controllers and has fully customizable virtual controls so you’re bound to find something that suits you. There’s also numerous options for adjusting graphical settings to target performance, battery life, or full visual splendor if that’s what you want. Handy Games never fails when it comes to options in their premium mobile ports.

If you already played and enjoyed Wreckfest on another platform and just want a version you can stick in your pocket, you should be more than pleased with this mobile offering. If you haven’t played this one before and enjoy racing games in general, but want something a bit out of the ordinary, Wreckfest definitely fits the bill. With visuals cranked up for devices that can handle it this is a jaw-dropping game to see running on a little iPhone, and it doesn’t hurt that it’s also some of the most fun I’ve had in quite some time.